NV Logistics has been awarded for the second time the prestigious trophy of “WCA Pharma Best Partner” for 2018 during the award dinner ceremony of the last WSLF Barcelona Conference. This year the World Specialty Logistics Fair took place in Spain from June 14 to June 17 and gathered more than 150 logistics professionals from all over the world.

The conference kicked off with a GDP Pharmaceutical Training Course on the first day and was followed by interactive members workstops and One-on-One meetings as well as a GDP Refresher Course for the registered WCA Pharma members, an opportunity to confirm their eligibility within the group. The focus was set again on global standards for Pharmaceutical and Life Science handling, distribution and transport to guarantee that a good global pharmaceutical supply chain will ensure that all patients receive the care and attention they deserve.

Among members who successfully renewed their GDP Certificate, NV Logistics is proud to receive again this top award crowning 7 dedicated years of presence in the pharmaceutical and biotech logistics.

NV Logistics is certified as whole seller by Swissmedic (Swiss Agency for the Therapeutic Products) and provide both storage and deliveries of therapeutical products for the industry. 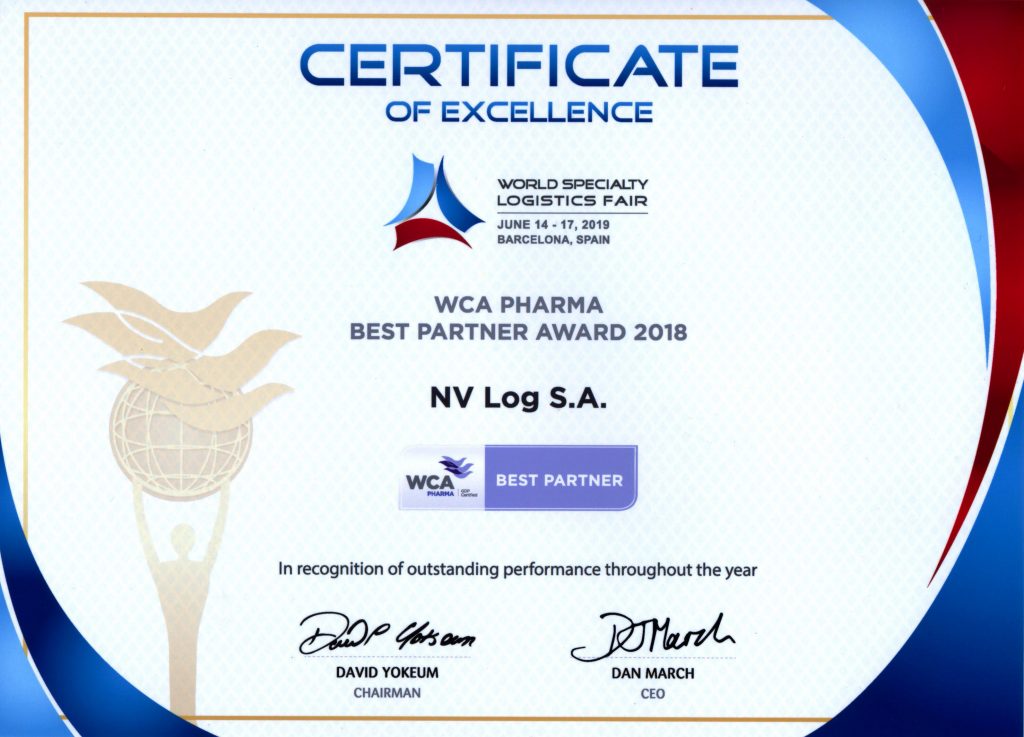 Our Company, NV Logistics has shipped World Archery’s equipment since 2018. 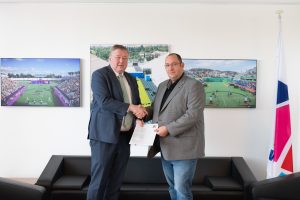 NV Logistics has handled storage and shipping of sports-specific equipment for World Archery Federation since the start of 2018.

This relationship will continue until the end of the 2021 season under the new contract. NV Logistics will now receive event exposure and additional marketing benefits.

A series of videos that detail the organizational challenges of an international series of events will be produced by World Archery Federation with the help of NV Logistics who will provide content to assist national archery federations on topics such as shipping, storage and transport.

World Archery Federation secretary general Tom Dielen said: “Logistics are a critical behind-the-scenes component of any successful event. Since the start of 2018, NV Logistics has been a reliable partner in delivering our international tournaments and we are happy to see that the relationship between our two organisations is strengthening.” 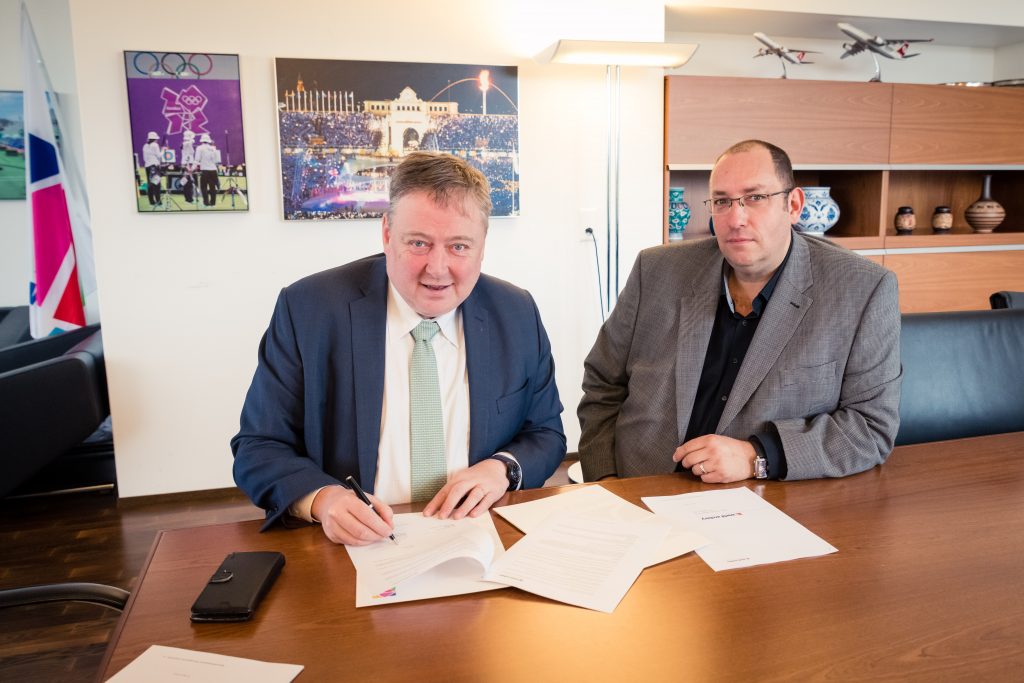 NV Logistics CEO Thierry Moreno said: “We are proud to sign this long term agreement reinforcing our cooperation with World Archery. The fact that we share the sport’s values of preparation, experience and precision in the logistics operations of an event allows us to always fulfil the ambitious requirements of our clients. This partnership will reinforce the position of NV Logistics as a key partner for event logistics in sport and culture. 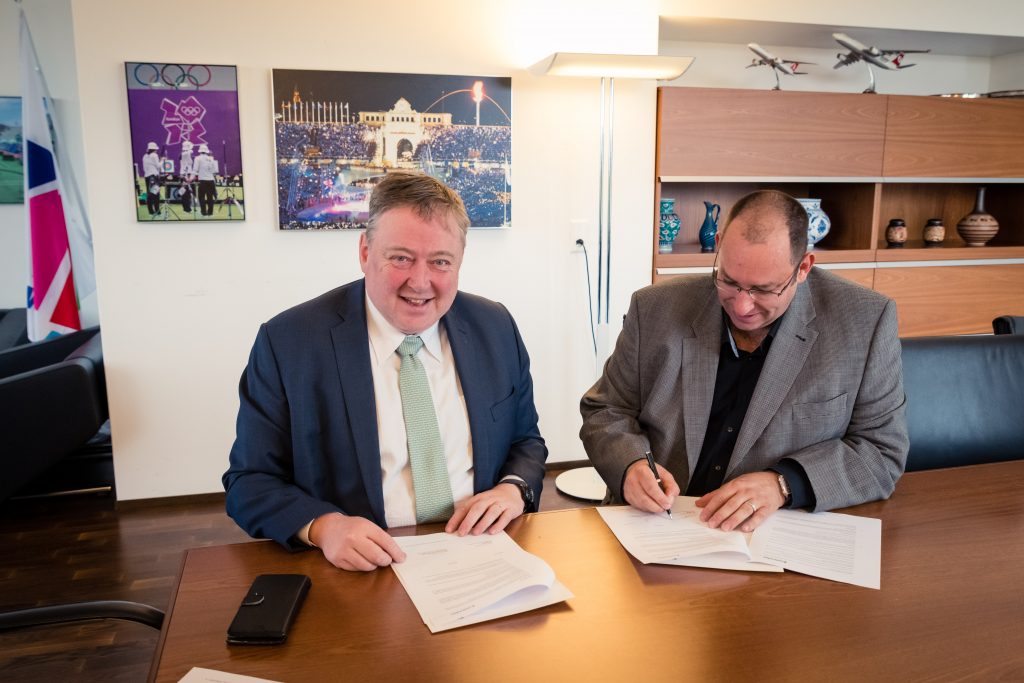 Departure Lausanne Blécherette, arrival Bournemouth, in the south of England… this is the new air route proposed by NV Logistics to anticipate potential problems with the transport and customs clearance of goods caused by the exit of the United Kingdom from the European Union. Specialising in air and sea freight, the Swiss company has sought an innovative solution for its customers, to avoid the bottleneck generated by the inevitable overload of customs formalities at major British entry points. The implementation of this flight route is unique and will allow its customers to ensure the continuity of their deliveries to Great Britain despite the logistical disruptions caused by Brexit.

Whatever the exit scenario, the consequences of Brexit will not be limited to Britain and the EU. Switzerland is also affected because of its close economic interdependence. The United Kingdom is indeed an important partner of the country; in 2017, it was the 6th largest export market for Swiss goods (CHF 11.4 billion) and the 8th largest import market (CHF 6 billion). Although the Federal Council has recently signed several agreements, particularly on road and air transport, companies are still worried about the upheavals that Brexit may cause.

In this context of uncertainty, NV Logistics, a company specialising in the international transport of goods, has sought for one of its customers, the Bobst company, a solution that would allow it to protect itself against the practical problems associated with congestion risks and formalities at customs. For Bobst, the world leader in equipment and services for the packaging industry, it is essential to be able to supply its customers on time in order to avoid any unwanted delays in supply.

The main air freight routes currently pass through London, Manchester, Glasgow and Cardiff airports. With the reintroduction of border controls, these usual logistics channels will quickly become saturated. NV Logistics‘ solution for Bobst involved chartering a Pilatus PC-12, nicknamed the Swiss Army Knife, with a capacity of 800 kg, and testing a new route, unprecedented in air freight, connecting the regional airport of Lausanne Blécherette to Bournemouth in southern England.

A first test flight took place last Thursday allowing NV Logistics to check all transport logistics, from the departure in Switzerland to the final delivery of the goods. Each step was assessed, including flight duration, Swiss and British customs formalities and, once completed, the transport of the goods to their final destination by a fleet of light vehicles.

The success of this operation prompted NV Logistics to offer this service to its other customers by launching today Brexit Airlift J.O.B* solutions from Lausanne Blécherette to Bournemouth. These solutions will be able to meet both tailor-made needs by chartering a dedicated cargo plane and more standard demands by operating a regular Blécherette-Bournemouth airline service twice a week, depending on needs.

* Name based on the initials of Jack O Bennet, the pilot who made the first flight of the Berlin Airlift in 1948, following the blockade set up by Stalin.

Thierry Moreno, Managing Director of NV Logistics says: “With the success of this first test flight, we can offer a unique, reliable and extremely fast solution not only to Bobst but to all exporting companies in fields such as machine tool spare parts, aeronautics, watchmaking and pharmaceuticals, which are all key sectors for Swiss exports. With nearly 8,000 trucks currently crossing the border every day without customs formalities, our solution makes it possible to overcome the bottlenecks that will inevitably arise with the re-establishment of physical borders with the EU for the Channel crossing to Calais.”

Pierre Schmid, Global Logistics Manager at Bobst adds: “The new “air taxi” solution is perfectly in line with our desire to continue serving our British customers in the event of a hard Brexit.”

It’s official, the “d” day of the breaking up between the United Kingdom and the European Union is imminent! The Brexit process which started in 2017 is soon ending on October 31.

This critical event is capable to turn everything topsy-turvy.

Our solutions : The BREXIGEDDON concepts

With the aim to anticipate any possible delivery and customs problems not forgetting a possible backlog on your shipments, we propose our BREXIT AIRLIFT J.O.B* Solutions from Geneva Cointrin to Bournemouth, a new concept to perfectly fit your requirements!

* Named after Jack O. Bennett, the pilot who has realized the first Berlin airlift in 1948 following the blockade implemented by Stalin. 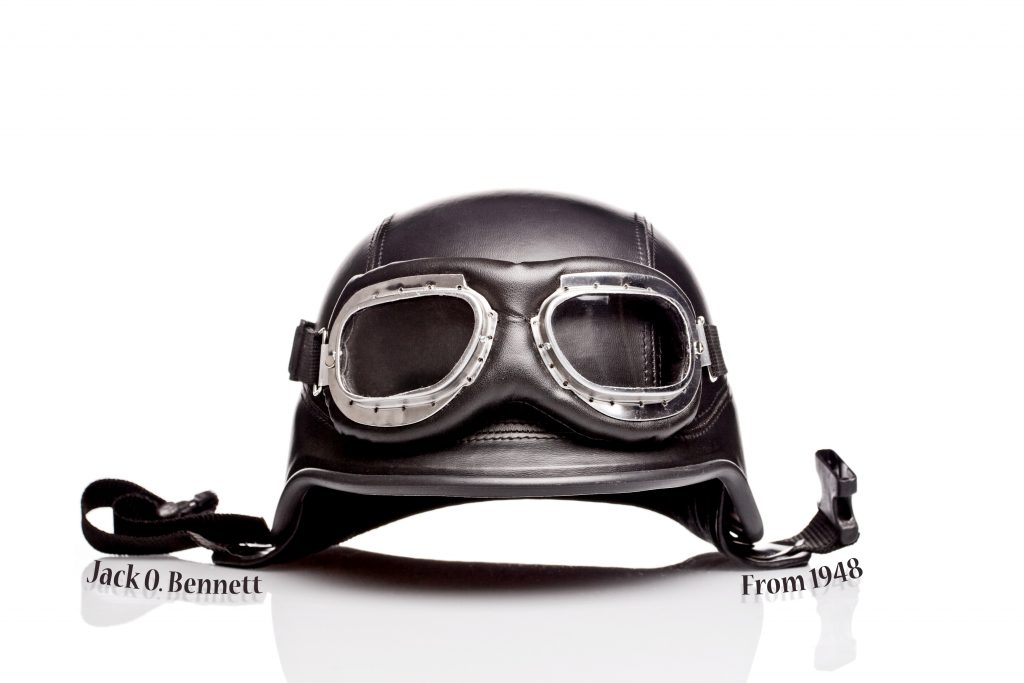 Twice weekly, we charter a Pilatus PC-12, the swiss knife of aircrafts, from Geneva Airport to Bournemouth and back. Flight time is 2 hours.

We look after all custom requirement (CH Export – UK Import) as well as final delivery to consignee by our vehicle Fleet. Deadline for assured delivery is two hours prior the flight.

As a plus, our light vehicle Fleet will deliver your parcel at any address in the UK. Contact us for more information!

*Depending on traffic and flight conditions

On request we charter a Pilatus PC-12 aircraft of one ton capacity (5m3), from Geneva Airport to Bournemouth and back. Flight time is 2 hours.

Deadline for parcel delivery is 2 hours prior the flight and we look after all custom requirement (CH Export – UK Import) as well as final delivery to consignee by our vehicle Fleet.

As a plus, our light vehicle Fleet will deliver your parcel at any address in the UK. Contact us for more information!

*Depending on traffic and flight conditions

Our skilled personal will dispatch your parcel with care to its final destination thanks to regular flights from Geneva, Basel or Zurich. Maximum parcel size and weight in cabins or in the hold are dependent to the rules of each individual airline company. Contact us for more information!

You have a little bit more time for your delivery?

Our light vehicles Fleet will perfectly answer your requirements with a capacity of 800kg or 1,5 m3. An everyday round the clock service through the Channel either by ferry or train, depending on availability. Transportation time, 15 hours.

Deadline for parcel delivery is one hour prior departure time from Geneva. Contact us for more information! 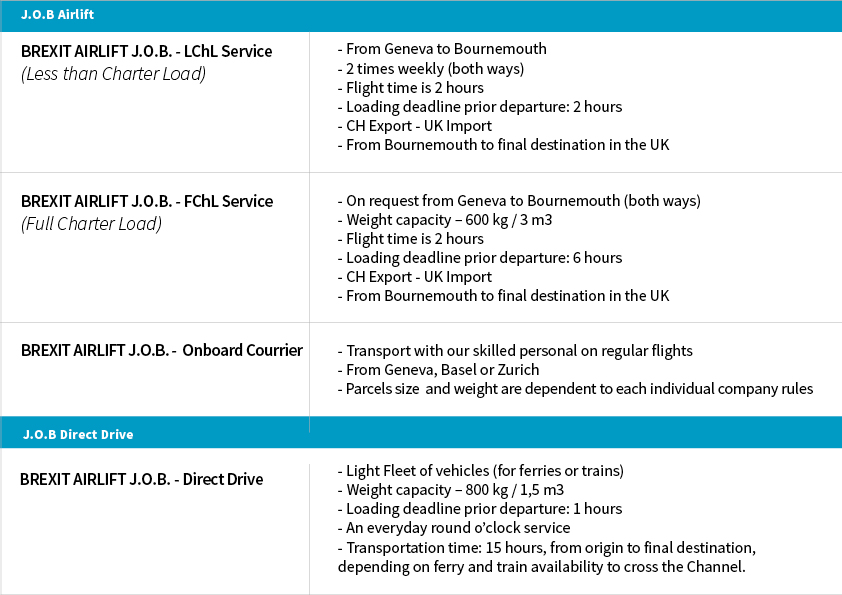 The year of the Pig

Chinese New Year is fixed for Tuesday February 5, 2019. This year will be the year of the Pig symbolizing honesty and rigour.

Most Chinese companies will therefore be closed from February 2 to February 10 2019. This closure might create a temporary airfaires rise as well as delays before and after this timespan due to a capacity storage on sea and air transportation to Europe.

We kindly recommend you to bake all necessary steps to avoid delays in relation to this closing but be ensured that NV Logistics will act accordingly to limit possible negative outcome regarding your logistics. 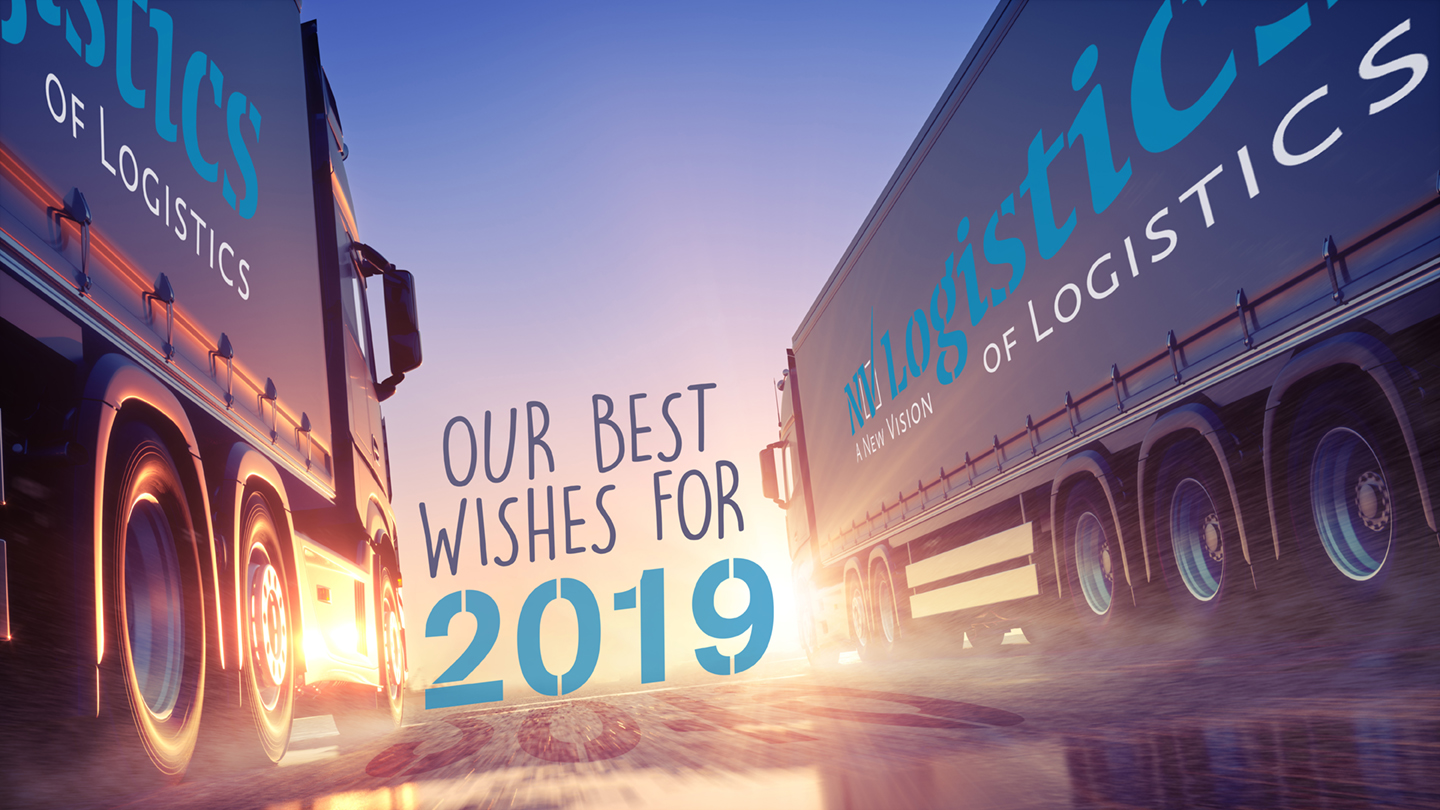 The NV Logistics team has grown rapidly in recent years thanks to the tailor made and high quality service offered to its customers.

In order to best absorb this growing activity and maintain a good working environment for our team, the “Operations” department led by Tobias Magalhaes moved on January 1st 2019 to new, more spacious and functional premises located in Satigny, in the ZIMEYSA industrial zone still near the airport.

In a second step, as from April 1st, we will transfer our storage activities currently in Meyrin to the same place in a new close to 600 m2 warehouse offering a storage nearly 500 pallets capacity. The consolidation of these activities on the same site will allow us to be more reactive and efficient.

Important information about this relocation:

Should you have any questions, do not hesitate to contact our team by email or by phone.

The NV Team wishes you a happy new year! 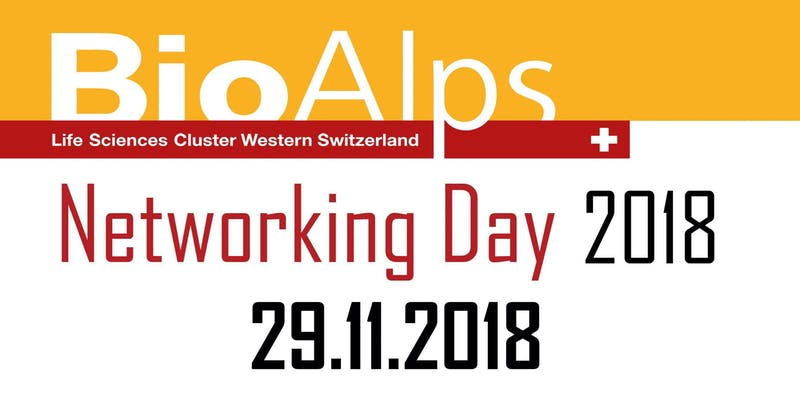 Life sciences development, a cause backed up by NV Logistics

As one of the main sponsor of the BioAlps Networking Day 2018, an event to take place

NV Logistics is proudly associated to this afternoon placed under the theme of :

“The dysworking of our immunary system : the autoimunes illnesses, inflammatories and allergies, from innovation to societal challenges.”

This event offer not only the exceptional opportunity to meet futur partners, clients or investors, but was also choosen by the association as an opportunity to remit the BioAlps 2018 price.

Continued speakers will intervene during this forthcoming thrilling afternoon that NV Logistics is eager to share with you. 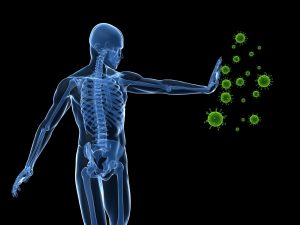